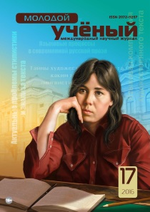 The beginning of large-scale development of the Ural region belongs to the first part of the 18th century. Conditions of its development entirely depended from level of administrations and plant owners care, working conditions, level of life and organization of medical care. Rather big attention was paid to the last circumstance. 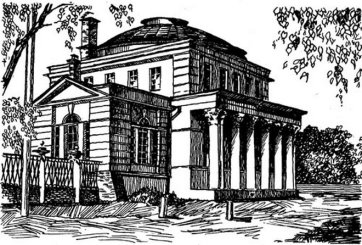 The settlement Verkh-Isetsky has arisen in 1726 along with steel plant and till 1917 officially didn't belongs to Ekaterinburg, but has been always comprehensively connected with it. Originally the workers of the Verkh-Isetsky plant used a services of the Ekaterinburg hospital, and only in 1767 there appears doctor—Mikhail Trofimov. His work consisted from pulling out from bodies the cast iron splinters which were flying away from tools, yanking the teeth, opening abscesses, etc. [4, p. 19].

In process of production expansion and growth of number of workers the problem of medical care on Verkh-Isetsky plant rose more and more sharply. In 1816 the royal decree very strictly ordered to the plant owners «… to start by all means the structure of hospital …». So construction process has been carried out in 1824–1826. It was built by M. P. Malakhov's project and represented the complex consisted from main hospital building for 36 beds, out-patient clinic, a house for doctors, and also two pavilions(fig. 1).

As writes L. A. Kozinet`s, in the book «Stone Chronicle of the City»: «Following the principles of classicism, M. P. Malakhov has designed hospital in the form of ensemble of buildings with accurately expressed symmetry axis. This axis is accented by the central corpus of hospital — the compact two-storeyed construction with two side wings topped with a flat dome» [1, p. 77].

Two side wings represents two hospital corpuses (one of them the house of doctor which has remained till today without considerable changes), from the yard, behind the main facade the one-storey administrative corpus was settled down. In maintenance of hospital ensemble the three-part symmetric composition is traced (the main corpus dominates) (fig. 2). 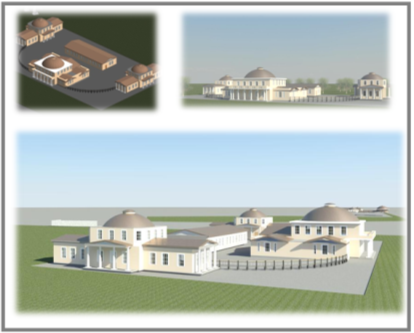 Figure 2. Virtual model of a complex

The main corpus is allocated not only by composition mean, but also by its height — it has two floors, side wings are one-stored, but at the same time have the similar top, as the main corpus. About architectural richness of facades, we can judge only by extant drawings and sketches, now the most part is lost. Before reconstruction the main facade has been decorated with an eight-columned Corinthian portico with the coupled side columns, side wings had three four-columned Doric porticoes.

In Soviet period here were also located healthcare facilities (hospital, out-patient clinic, and then emergency station), but exterior of a complex has undergone considerable changes.

In 1911 buildings of hospital, out-patient clinic and drugstore have been connected by one-storey brick crossings. During these works were removed porticoes from east and western facades of out-patient clinics. Then because of putting the tram line in 1930 a portico at the main corpus was demolished. Full reconstruction of the building has been made in 1936. Dismantle of columns of the main corpus became initial stage. Comparing the plan of the architect Malakhov and the plan after reorganization, we can estimate the made changes and analyse their reasons, reveal what requirements to treatment-and-prophylactic establishments have changed from the time of reconstruction.

The following changes have been made in the plan (see fig. 3):

− the area of the floor was increased;

− layout of stairs was changed;

− gates were added (the platform before an entrance to ward); 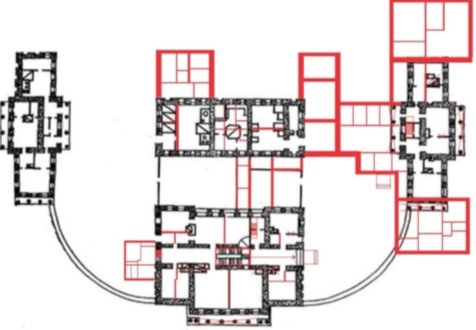 The project of reconstruction provided a reorganization of hospital in policlinic therefore wards have turned into cabinets, for convenience the main stair was transferred, were added several entrances, were increased quantity of utility rooms.

Quite markedly that the volume of the new build parts of the hospital actually equal to the existed complex. It can be connected with the increased load on hospital because of an increase in population, and with change of requirements (see fig. 4).

Figure 4. Virtual model of a complex after reconstruction

As far as reorganization was conducted in Soviet period when constructivism and simplicity of facades was fashionable, perhaps, it was the reason of demolition of porticoes of a complex, refusal of architectural decoration. During reconstruction furnace heating has been replaced on central (see fig. 5). 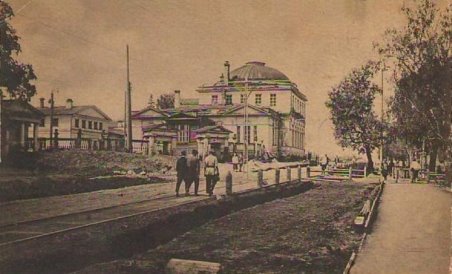 The ensemble on Verkh-Isetsky Boulevard, 9–15 takes the worthy place in the State list of historical and cultural monuments of Sverdlovsk region as an architectural monument. Since 2004 the building isn't operated and now is in a deplorable condition. On the main facade was pulled a banner, with the image of an initial facade of the building. The territory of hospital is used as the parking for cars of the near standing mall.

In 2011 on the site of hospital construction works have begun, the roof of the main corpus was dismantled, but because of violation of the legislation by contract organization in the sphere of protection of monuments of culture all works have been stopped. Later preservation of the building has been carried out, all windows have been closed by a brick not to allow a failure (see fig. 6). 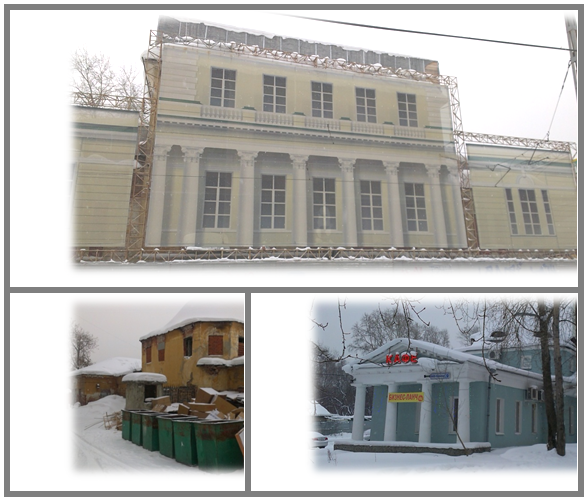 Figure 6. Photos of present condition of the hospital

The legislation in the field of protection of monuments of architecture on the one hand forbids demolition of such buildings, but on the other hand does not oblige to reconstruct and recover their initial shape, thus, the building remained forgotten and thrown in the center of the megalopolis. It is important that recovery and reconstruction of object were not limited to the certain building, and have been directed to all complex. In terms of today's condition of hospital and laws in the field of its preserving, it is possible to offer the following options of reconstruction:

The Verkh-Isetsky hospital is a unique object with almost 200-year history, which is on the verge of destruction today. It is not only the architectural monument executed in style classicism (first-born style of Ekaterinburg), but also part of our history, city history therefore it is so important to keep this complex.

In case of any described or again offered reconstruction option, it is important to keep the greatness particles which have reached to our generation and to recover the lost elements of a hospital complex. A complex of buildings of the Verkh-Isetsky plant hospital had undergone a set of changes: from global reconstruction to almost final failure. Now it is in critical and dilapidated condition, the decision about its future is not known.